Capcom was one of the giants in the arcade industry, but most of their console releases were at the time ports of their arcade games. They felt it was time to create games for home consoles that weren’t necessarily arcade ports, and thus Rockman was born, or as we know him better: Mega Man. Why the change in name? I dunno, some random Capcom Vice-President thought the title was horrible and changed it for localization. A new dream team was born with the likes of director Akira Kitamura who can be considered the father of the franchise alongside the artist Keiji Inafune. They took inspiration from many different media such as Astro Boy. Elec Man was even designed after American comic book characters and it shows. Originally Mega Man was also planned to be named “Mighty Kid”, “Knuckle Kid” or “Rainbow Man”, with the last name referring the changes in colour Rock undergoes when he changes weapons. His initial colour is blue because of the NES’ technical limitations, and they were able to create the most detailed sprite with the colour Blue. Finally, rock-paper-scissors was a huge inspiration and it definitely comes back in gameplay. While the game was originally received well, it sold poorly and no sequel was planned. I blame the cover art which was horrendous. Fortunately minds were changed about continuing the franchise but that’s a topic for another.. page. 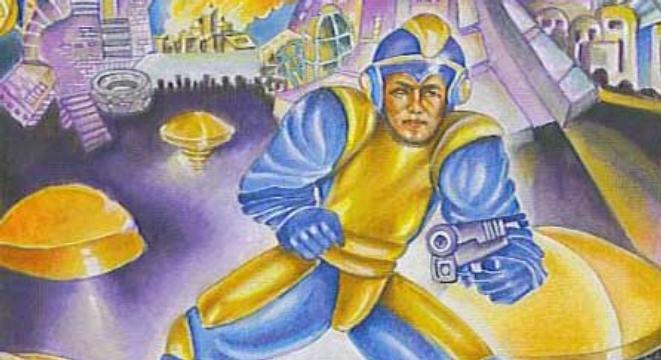 Who honestly thought this box art would sell?

Initially the story was supposed to be Rock rescuing his sister Roll from the evil Dr. Wily. Good thing that didn’t happen as almost every game had that trope back then. Also clever naming Capcom, I see what you did there. Instead, Mega Man 1 takes place in the then far future of 200X, where mankind is assisted by robots developed by Dr. Light and Dr. Wily. Humanity was happy and praised Dr. Light for all his work! ..But not Wily. Poor ol’ Wily, he did his best too. Jealousy ensued and suddenly six robot masters created by Dr. Light went rogue and started attacking civilians after Wily hijacked them. Wily doesn’t get praise? So be it, he’ll just take over the world then. And he would have if not for one tiny robot created by Dr. Light: Mega Man. Now it’s up for him to bring the evil Robot Masters back to their senses and stop Wily once and for all! Or twelve times and for all, whatever works with you.

You’re immediately booted to the boss selection screen where you can choose from any of the six bosses. What one you select doesn’t matter, but some stages and bosses will be easier or more difficult than others. I personally recommend doing Elec Man after having defeated Guts Man first because of a secret item, which I’ll come back to later. After a short introduction that will remain a staple for the rest of the series even after the classic series, the stage starts and you’re ready to go. At first Mega Man only has two abilities that define him: jumping and shooting. Shooting is very satisfying as it happens fast, and it can be done both in air and on the ground. Jumping is what we’re used to, but this game specifically has one negative aspect that makes precise platforming tougher than it should be. Rock constantly has soap under his shoes or something, making even the easiest of jumps risky. Even walking around and stopping right before the edge is dangerous.

Stages themselves range from horizontal to vertical and anything in between. Every robot master has its stage themed after their element. Ice Man’s stage has slippery floors for example, while Guts Man takes you through a mining shaft. Ice Man’s stage in particular is the worst without the before mentioned secret item however, as it introduces a hazard present in every game after: disappearing blocks. You have to platform by blocks that constantly disappear and combined with the extra slippery ice mechanics, that isn’t the most pleasant platforming section out there. At least none of these are placed above bottomless pits so that’s good. Throughout the stages there are checkpoints indicated by a shift in screens, though that isn’t always the case. Rock has a health bar that depletes whenever he takes damage or instantly empties when hitting spikes or a bottomless pit. Health can be refilled by picking up health tanks dropped by enemies or randomly placed on the floor. Enemies also drop point containers which increase your score to replicate the arcade feel, but since there was no leaderboard and neither did it grant 1-ups, the mechanic was completely pointless and removed from future games. 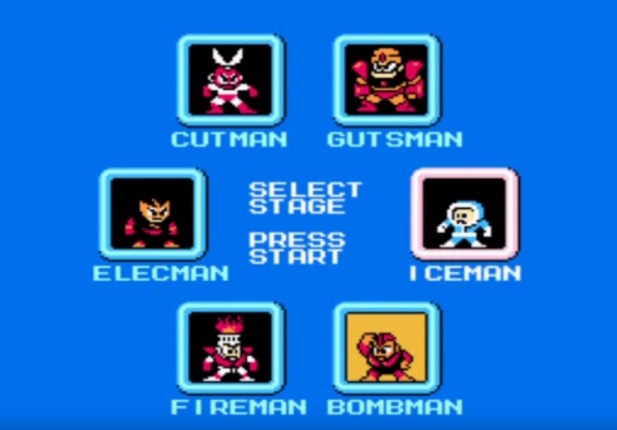 Aside from the stages, enemies are the main attraction before getting to the boss. Like the stages, they’re themed after the element such as mechanized penguins. Usually the most annoying enemies take one shot to kill, while bigger stationary enemies take multiple. The most annoying enemies in this game are the Big Eyes, huge robots that jump around with a random pattern and have the tendency to do exactly the movements you don’t want them to do. Not only that, but they’re bullet sponges and it’s better to avoid them altogether. Some enemies are also placed near bottomless pits so you’ll need to take your time instead of rushing through the stage. Other enemies such as Gabyoalls are also very annoying, as they can’t be killed without a specific weapon and instead only stunned. And they love hanging around platforming challenges as well. This game might have the most annoying enemies out of all of the games, but most of them are still fine regardless.

When finally reaching the end of a stage, you’re invited into the boss waiting room. This is the only game that has monsters spawning inside said room, which can be beneficial as you can stock up on health right before the boss.. or be annoyances that take away your health before fighting the boss. The bosses themselves all have their own patterns and are fun to fight. I wasn’t a huge fan of Fire Man because he keeps firing his fire waves at you non-stop unless he is hit, but all the other Robot Masters put up a fair fight. I don’t think they’re necessarily tough, but if you lose all your lives you have to start the entire stage all over again. Beat them however, and you steal their weapon for your own personal use. These can be used at any time and some might even make platforming through the stages a lot easier, though all weapons have an ammo bar that depletes the more you use it. More ammo can be found in the stages however, but this introduces the element of risk versus reward. Enemies can be killed more easily with certain weapons, and bosses may also be weak against them. Cut Man for example has all of his challenge thrown away when you shove some rocks in his face, and Elec Man’s wires can also be cut to render him useless. It’s not too difficult to guess what Robot Master is weak against what weapon, but it’s fun discovering their weaknesses on your own. And if you want their original challenging fight, you just.. don’t use the weapon, simple as that.

The weapons are part of what make or break the game, and this game has both good and bad ones. Elec Man, Cut Man and Fire Man their weapons deal good damage with the latter also providing a short shield surrounding Rock that.. never really worked for me. But that shield does also damage enemies that get close to you so that’s good. Ice Man’s weapon can freeze enemies which was good for the Big Eyes–if they moved how you wanted them to at least. Bomb Man’s weapon requires some getting used to, as the thrown bomb explodes after three seconds. I never used this outside of Guts Man his boss battle, which segues me nicely into his weapon which absolutely sucks. It can only be used when bricks are nearby which granted, do a lot of damage, but outside of that is has zero use. The Robot Master that is weak to his weapon doesn’t even have bricks in the second encounter, making the weapon an even bigger joke. The only other use it has is being able to grab an “optional” weapon in Elec Man’s stage, which is the Magnet Beam. This Beam makes platforming challenges a lot easier as you can just.. create your own platforms. But note why I put optional in parentheses, as your progress through the final levels are halted without having this so-called optional weapon. 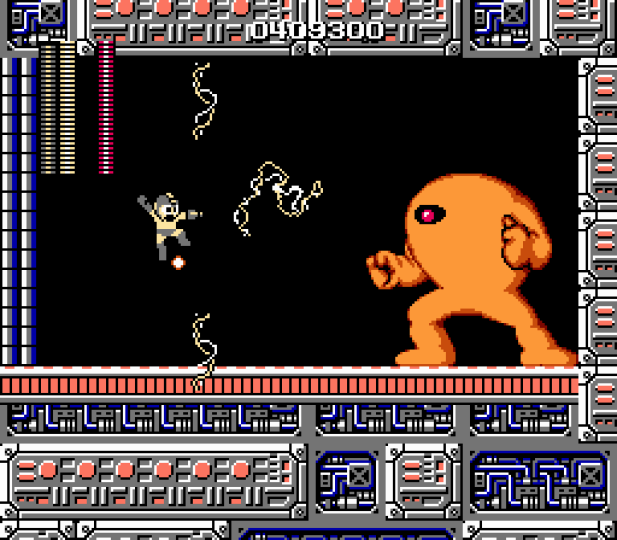 It is a tradition that after the Robot Masters are beaten, Rock continues to go out and kick Wily’s sweet bippy in one of the many skull-like castles. These are a set of usually four stages with a unique boss at the end of every level. Mega Man 1 arguably has the most infamous one being the Yellow Devil.. which is not as hard as many people make it out to be since his patterns will always remain the same. The problem is that he’s at the end of a decently long stage. But for the people who still find him difficult, the infinite pause glitch is always an option. The game overall is difficult, but not on the level as many NES hard games. The difficulty mostly comes from the nonsense enemy placement, like just above a ladder and since you can only hit them with Elec Man’s weapon, you’re bound to fall down easily. Patience truly is key in this game, or franchise as a whole. If you want more challenge you can always limit yourself well with doing a buster-only run and ignoring the magnet beam. Replayability therefore is high, and that’s perfect for this game since you can be done in a little under an hour depending on skill. The latter has its advantages however as you can’t save this game, neither does it have a password system.

Since this was the first game, it’s not the most beautiful game out there. Everything is clear to see however, and the game only slows down a bit when too many enemies are on screen. This is an unpopular opinion but I wasn’t too fond of the soundtrack either. It had too many high pitches in there that annoyed me. The rhythm was good however, and I am fond of the credits theme as it brings back a lot of memories every time I hear it.

Mega Man 1 starts the franchise off strong, but it is also the game that shows its age the most out of all of them. Platforming feels very sloppy with Mega Man constantly feeling like he’s on ice, and bad enemy placement doesn’t exactly help with that. Regardless, this game is still fun to play but I wouldn’t necessarily recommend it as someone’s first Mega Man game. And with that, here is my final verdict for Mega Man 1:

And that’s the first game of the bunch! Definitely not a bad game, but it did show improvements were to be made. The first game like the others are available on the NES, the anniversary collection on the PlayStation 2, the Legacy collections on multiple current generation consoles and also on various digital stores. Basically, it’s everywhere.